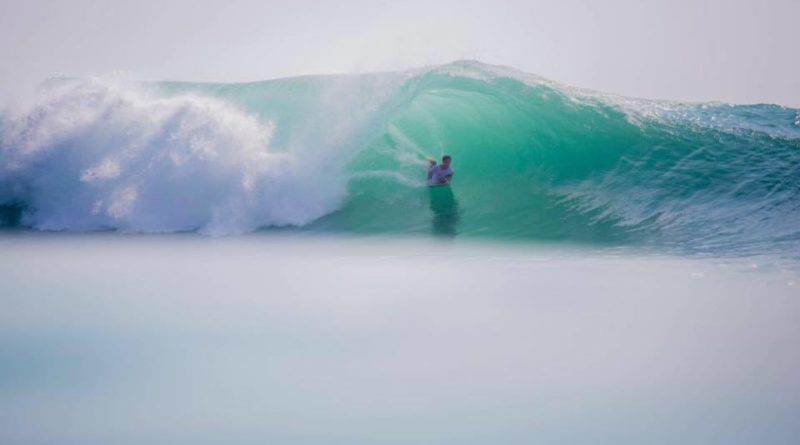 1) Hey Mike, thanks for chatting to us! How’s lockdown been going in Hawaii?

Thanks for having me! It’s been good man. I’ve been really fortunate to be stuck here actually. There are no flights home at the moment so I’ve been able to keep extending my visa. We had a crazy run of late-season swell and Pipeline was firing on all cylinders. Summer is in full effect and it’s pretty flat now so kind of itching to be able to travel and get some waves!

2) Tell us about how you got into bodyboarding?

I would say I started bodyboarding pretty late, maybe when I was about 15. I was always at the beach (back home in Umhlanga, Durban) bodysurfing with friends, but only really got into bodyboarding when a friend invited me to start coming to surf with him before schools in the morning. It all just took off from there. Bodyboarding definitely started everything for me and where I am today.

3) When did you first start filming and what made you start?

We were doing all these surf missions around Durban. It was always a good time with friends and I really felt the need to capture all these special moments and sessions. I think I got a GoPro to start off – the original GoPro Hero 1 and just started filming my friends and all the fun we were having. I look back at the videos now and laugh cause they were so bad! But they hold a lot of special memories for sure. I ended up getting my first DSLR, a Canon 600d and started getting a little better and better.

4) What was the most memorable movie you have made in your career?

There’s a few for sure! I’d say working with Iain Campbell on the year of his maiden world title was definitely a highlight. We just started filming together at the beginning of 2017. He had just moved to Cape Town and I was in my final year studying a business degree at Stellenbosch. He just started doing really well on the tour and we were sitting on all this epic footage, literally telling the whole story of his year. We ended up premiering “Chasing the Southern Sun” in Durban and Cape Town with sold-out venues. I actually remember I had been writing my final exams so I could only edit the film a week or so before we premiered it haha! Iain already had the dates locked in and everything and I was just at home up for a week straight trying to finish the movie!

Another memorable film worth mentioning is African Fire with Allan Horton. Allan is the most frothed bodyboarder I know. I was super fortunate to have him guide me around when I moved to Stellenbosch to study. He showed me all these new crazy waves! It was an exciting time for sure.

5) Where do you prefer shooting from the land or in the ocean?
I’d have to say the water. It allows me to get the same stoke as the surfers are getting when the waves are goo! Nothing beats nailing an epic water clip.

6) What do you enjoy about making bodyboarding clips?
I would say the people and the community. The bodyboard community, in South Africa and worldwide, are so tight-knit. Everyone’s doing it and chasing waves for the love of it.
When I make bodyboard clips it brings me back to my passion and why originally started filmmaking.

7) Any new clips or movies on the go at the moment?
I have a surf clip from West Oz with Shane Sykes dropping next week! Keep an eye out.

8) Where do you want to see yourself in the next 5 years in filming?
That’s a great question and one I’m still asking myself actually haha.
I think I’d like to diversify into other avenues of filmmaking, not just surfing. Maybe commercial, some documentary or short films. I think I just want to try a bit of everything so that I see what I enjoy the most.

9) What’s it like hanging with the Smith bros they look super fun to be around😂
Haha yes, it’s always epic! They’re just really good people with good values.
We’ve all gotten really close over the last few months of me being here and it’s so epic!
I’m so keen for us to be able to travel and start doing some trips.

10)Thanks for chatting to us at ZA Boogie and last words or shoutouts to your fans.
Thanks again for having me. Wow, it’s weird to think about that I have fans 😂
I’d like to say they’re friends or friends I haven’t met yet! I’d just like to say – enjoy every moment!
We’re super blessed to be able to surf and have the ocean as part of our lives.
Stay grateful for that 🤙🏼