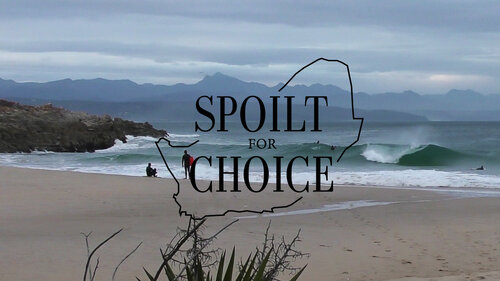 A full-length bodyboarding film about the variety of waves South Africa has to offer mixed in with the countries best riders. With his new film ‘Spoilt For Choice’ James Symmonds well and truly puts the prowess of South Africa’s waves and riders in the spotlight. Featuring waves from Capetown to Namibia, and riders such as Iain Campbell, Tristan Roberts, and Wilder Schultz the film is certainly not short on eye-catching content.

“Spoilt for Choice was a film I put together over the space of about 2-3 years. Since I grew up and became a bodyboarder I enjoyed making films. Seeing the likes of Lines of Fire by Peter Lambert as well as Contrast and LO-FLO by Greg Fraser, I was inspired to make a full-length bodyboard film one day. The goal of the film was to bring a new level of froth to the younger generation of riders that were growing up in South Africa. Another reason would be to highlight how amazing the country we live in is, the wave-rich coastline it possesses and the local talent coming out of SA.”
– James Symmonds